DOBERDOB - A NOVEL BY A REBEL | Bela Film
16094
portfolio_page-template-default,single,single-portfolio_page,postid-16094,b_,bv_,ajax_fade,page_not_loaded,,qode-child-theme-ver-1.0.0,qode-theme-ver-7.7,wpb-js-composer js-comp-ver-4.12,vc_responsive

DOBERDOB – A NOVEL BY A REBEL

In 1930, the war novel Doberdob by Prežihov Voranc was announced to be published. It describes the tragic stories of the soldiers that fought in the Doberdò plateau where according to historians majority of Slovenian soldiers battling during World War I bled to death.
The novel was only published in 1940. During the ten years after its publication was first announced the writer rewrote it three times because the manuscript vanished in strange circumstances several times. While Prežihov Voranc was writing the novel he was also politically active. He was one of the first communists in Slovenia. In 1937 he even became secretary of the Central Committee, which means he was ranked second in the hierarchy of the Yugoslav Communist Party. He was an agent of the Comintern, a traveller who spoke five languages, and he was in touch with several prominent politicians of the period. At the same time he remained personally modest, he kept believing in common man and held values that were less and less consistent with ever so rigorous communist’ ideology.
The novel Doberdob was written in the period when Voranc was mainly living underground due to his active life in politics.

„The documentary film Doberdob, a Novel by a Rebel successfully gives a comprehensive portrait of the period between the two world wars and after 1945, introducing an exciting story with many twists that – according to Martin Turk – we wouldn’t be willing to believe if it was turned into a feature film.“

„The documentary Doberdob, a Novel by a Rebel (…), filmed by the author and director Martin Turk, determinedly puts Prezihov Voranc right back into the Slovene historical memory as late as 65 years after the writer’s death.(…).

The film Doberdob, a Novel by a Rebel is an exceptional example of documentarian craft; besides, it includes suspense and a poetic, even open ending.“

„The contents of this documentary, i. e. the information it contains, make it both interesting and intriguing enough so that it may give inspiration for at least three feature films.“

„The documentary feature presenting various narrators and professionals is not purely the story about a novel but mostly the life story of Prezihov Voranc. And what a cinematic life it was! What an existence!“

„Many narrators, Prezih’s grand-daughter Metka PetriC among them, allow the documentary to encompass several dimensions of Prezihov Voranc, thus showing his literary and poetic greatness that surpasses his primary fame as the author of Lilies of the Valley and The Self-Sown.“

„The documentary feature acquires additional weight because of the narration of publicly less exposed historians, the final stress being given by the interview with Voranc’s grand-daughter Metka Petrič.“

„Basically I find Doberdob, the documentary directed by Martin Turk, to be an excellent film. I feel it is an ideal combination of human narrations regardless of who they were, be it Prezih’s grand-daughter, literary historians, Slavonic scholars or anybody who testified as to the fate of Doberdob. Namely, we all know that among all of Prezih’s novels the story behind Doberdob was the most remarkable one.“

MIRKO OSOJNIK (retired curator of the Carithian Regional Museum) after the premiere of the film at Ravne, Carinthia

„The director of the film chose an interesting method by creating a docudrama. The film includes a number of illustrations by Damjan Stepancic created especially for the film. As very few photographs of Voranc have been preserved, the director filled the void by using illustrations, so that viewers can catch a glimpse of the historic events more easily.

I find the film very interesting. It inspired me to read the novel Doberdob. It has approximately 500 pages but I found it interesting.“

Nika Janjic, 9a, journalism workshop at the primary school of Loka Crnomelj 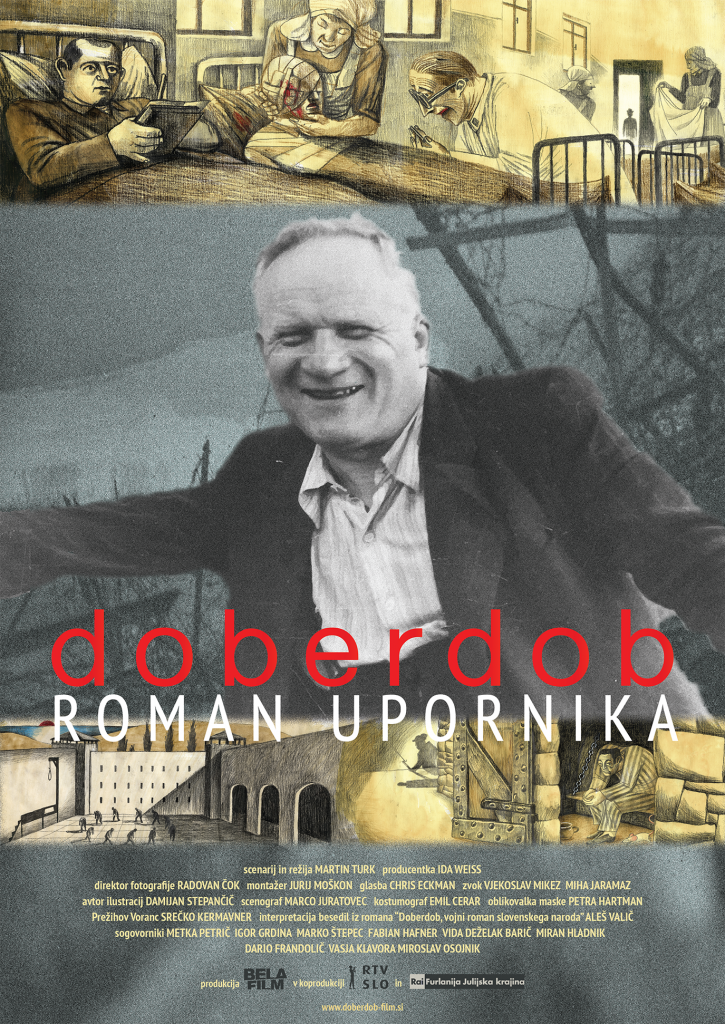